Oudin honored among UMD’s 30 under 30

Oudin honored among UMD’s 30 under 30

Before the NCAA Men’s Basketball season came to an abrupt halt with the closures of the Coronavirus, START’s Joe Oudin stood before more than 16,000 fans at Xfinity Center Court as the University of Maryland recognized him as an outstanding alum whose professional and personal achievements embody Maryland Pride. Named to the University of Maryland Terrapin Club’s 30 under 30 program, Oudin said everything came full circle at that moment on the basketball court. 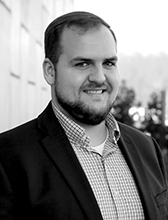 “I’ve been a Maryland basketball fan for as long as I can remember. My first visit to UMD wasn't a campus tour, it was to a UMD basketball game,” said Oudin.

Oudin has been at the university for about a decade, first as an undergrad, then as a graduate student and now as a faculty member and researcher with START.

A former campus tour guide always sure to talk about the history of the UMD Dairy ice cream (“it was originally made from cow's milk from the campus farm and it tastes so good because there is extra fat in it”), Oudin now teaches an undergraduate terrorism studies course and serves as a researcher on the Global Terrorism Database (GTD), the world’s most comprehensive database of terrorist attacks.

“The Terrapin Club's recognition of Joe is so well deserved,” GTD Manager Dr. Erin Miller said. “He's a fantastic team member – supportive of his colleagues and students, and dedicated to the GTD team's mission to provide a critical foundation for data-driven policy around the world."

In his GTD role, Oudin manages a small team of interns and research assistants who code variables related to casualties, outcomes and perpetrators of terrorist attacks.

“I’ve been more focused on the perpetrator data this semester and it has been interesting to learn about just how many groups are active globally in different regions,” Oudin said. “We are also seeing the emergence of several ISIL-affiliated groups on different continents.”

Most of his time is spent triaging the data – reading news articles that potentially reference terrorist attacks as identified by the GTD’s automated data collection process, identifying distinct attacks that meet GTD inclusion criteria, summarizing and adding those attacks to the data management system and sorting through other articles related to that event.

“I think people are often either intimidated or bored by the term ‘data collection.’ They think spreadsheets, big data, boring things, etc., but GTD data collection is actually very interesting,” Oudin said. “Since we are an open-source database, the vast majority of GTD work involves reading news articles from around the world about current events in terrorism, which to me is always interesting. As a researcher, I get a snapshot of different regions of the world by reading news publications I wouldn’t read otherwise.”

Those snapshots fueled much of Oudin’s undergraduate and graduate research; articles he read while coding GTD data would shape a project or paper topic.  He began working on the GTD in 2013 after taking a class taught by Dr. Michael Jensen, head of START’s radicalization research portfolio and GTD data collection manager. The course, which Oudin says was one of his favorites, provided an overview of U.S. security policy, counterterrorism posture and terrorist organizations.

When Jensen encouraged those who enjoyed the class to apply for an internship at START, Oudin was quick to take the advice. After completing his internship, he earned a spot as a paid hourly research assistant and continued working on a variety of GTD teams until he finished his master’s degree in 2015. Immediately after graduation, Oudin started work full-time at START.

“The GTD has been a great project to work on,” Oudin said. “It is a great working environment and we have a great team dynamic, and I think both of those things reflect Erin Miller's incredible leadership.”

The GTD is often among the teams recognized as exemplar through the Thriving Workplace initiative at the University of Maryland.

“One of the great things about our project is that everyone on the team, including full-time researchers and interns, plays a substantive role in data collection,” Oudin said. “The annual release of the data – a comprehensive, reliable and unbiased dataset – is the culmination of a year of hard work by a devoted GTD research team.”

Oudin said the most rewarding part of being a GTD researcher is working with students. His interns have gone on to complete degrees in top-tier graduate programs and others now are working their dream jobs in the intelligence and security fields.

He also enjoys teaching for START’s Global Terrorism Minor Program. He teaches the “States of Emergency” course in which 120 students take part in a semester-long ICONS simulation, role-playing leaders of organizations tasked with responding to a hypothetical terrorist attack in Washington, D.C. The interdisciplinary course offers a look into the complexity of dealing with crises at the societal level.

The Conversation: A quest for significance gone horribly wrong – how mass shooters pervert a universal desire to make a difference in the world
PolitiFact: What is the 'great replacement theory' linked to the Buffalo shooter?
Rolling Stone: Caught on tape: Oath Keeper leader wanted Trump to 'expose all the pedophiles'
END_OF_DOCUMENT_TOKEN_TO_BE_REPLACED