An expert in subjects relating to political violence, John Stevenson contributes to START’s Strategic Multilayer Assessment-funded projects as a lead investigator and senior researcher. His work combines foreign policy with assessments of global armed forces. A graduate of the University of Chicago and Dartmouth College, Stevenson also teaches a course on methodology and research analysis in START’s Graduate Certificate in Terrorism Analysis. 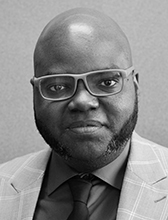 Aside from his work with START, Stevenson enjoys planning monthly seven-course meals for his friends, reading state and city budgets and writing opinion articles using concrete data for various news outlets such as Slate Magazine. He hopes to one day open his own seasonal restaurant, complete with “fancy cocktails.”

How did you hear about START?

I previously taught a class at the University of Chicago called “Blood, Boundaries, Beliefs: Religion and Violence.” For a lot of students, when they think about religion and violence, they think about terrorism as its most iconic form. START aims to make terrorism really boring in a good way, so I often had students download portions of the Global Terrorism Database (GTD) and use that to talk about violent events. So in general, I heard about START through its website. One day I was randomly clicking, looking for stuff on the GTD, and it turns out that there was a job opportunity.

What do you like more, teaching or conducting research?

Both are pleasurable and worthwhile pursuits, but they draw on very different skill sets. I enjoy the art of research more. Teaching helps me think about the critical ways to communicate what’s important about the topic to a non-specialist. I try to take that attitude into my research, especially into applied research like we do a lot of here at START. And even though I’ve met some success in teaching like research more because I enjoy the art of being a detective a little more than being an explainer-in-chief.

I enjoy exploring the types of violence that are used by states against populations in part because analysts seem to be rapidly using the language to evaluate the functions, forms and meanings of state violence. Sometimes state violence is seen as legitimate. For instance, one might argue that there are a lot of reasons that police should commit acts of violence to prevent crime – at least in theory. Sometimes state violence is seen as wrong: We might say invading another country is a type of violence we don’t support, except when we do under the banner of humanitarian intervention. When non-state actors use very similar kinds of violence to states, we tend discuss non-state actor violence as always already spectacular or bad. So much of my research interests aim to help me work through my confusion about why, if in general we think violence is bad, it matters who uses violence and how violence gets used.

You are a freelance data journalist. What do you do and what articles have you written?

I use data to say “let’s look again at a problem of what we think we know.” There’s the old adage that I used to teach in my classes: The most dangerous form of knowledge is the stuff that ‘we know that ain’t so’ and so we must be open to un-learning stuff that is less veridical than we may believe.

I’ve published two opinion pieces so far. One article emerged out of the last chapter of my dissertation and is on how the United States should not call a cease-fire in South Sudan in 2013 because it will increase violence in the country. It turns out I was right.

The second article had data that made a controversial point. After the killings of two police officers in New York late last year, people said that police officers were in danger and that we should be deferential to their point of view in handling crime and suspects. I crunched the numbers using data from the Bureau of Labor Statistics to argue that not only are police officers relatively safe now compared to the most dangerous time to be a police officer, which was the 1970s, but also that the most dangerous jobs, measuring danger in terms of rates of death, were actually grounds-keeping and logging. This is not to say that we should totally discount the views of public servants who are first-responders about the nature of their job, but just to highlight that we can use data to evaluate basically anything, including our own assumptions, which can change the way we assign value and meaning to our lives.

What do you do with your free time?

I have too many hobbies—Bill [Braniff] once good-naturedly joked that I should aim to be less interesting-- but there are two things that occupy most of time.

The first involves reading state and city budgets and watching how they structure their public debt. Everybody knows that we should not spend more than take in, but there are all these things that everybody wants that are often bought on credit and we have to service the debt from purchasing things on credit. So how do we pay for spending that we already authorized in the context of our desire to consume now and not pay taxes? It’s interesting how public officials have that conversation.  Everybody knows how to stop spending their own money, but how do they stop spending someone else’s money? It’s tough and it’s tricky, and I find that fascinating. Budgets are also interesting ways to tell stories about different places.

Beyond that, I enjoy cooking a lot. I’m mostly known among my friends for my extravagant dinners. Once a month, on a Sunday, I host 4-5 people in my apartment for one of my spectacular seven-course meals, which usually combines some sort of fusion food.  If I didn’t become a researcher, I would’ve become a chef. Once I become wealthy, and I’m still trying to figure out how to do that, I will turn this leisure activity into business. My idea is to have a restaurant that will appropriately be yuppie and seasonal, and have obscure alcohol and fancy cocktails.

The Guardian: The dark side of wellness: the overlap between spiritual thinking and far-right conspiracies
Fox News: Extremist groups are recruiting veterans; House lawmakers want to know why and how
AP News: 'Radicalized' veteran gets time served for anti-police bombs
END_OF_DOCUMENT_TOKEN_TO_BE_REPLACED